Come and see a fantastic tribute to two of the World's biggest stars...Taylor Swift & Katy Perry.

Katy Ellis not only looks like the part with exact replica costumes but sounds and acts the same too with perfect choreography matching that of the Stars tour shows.

Tickets only available online for only £1 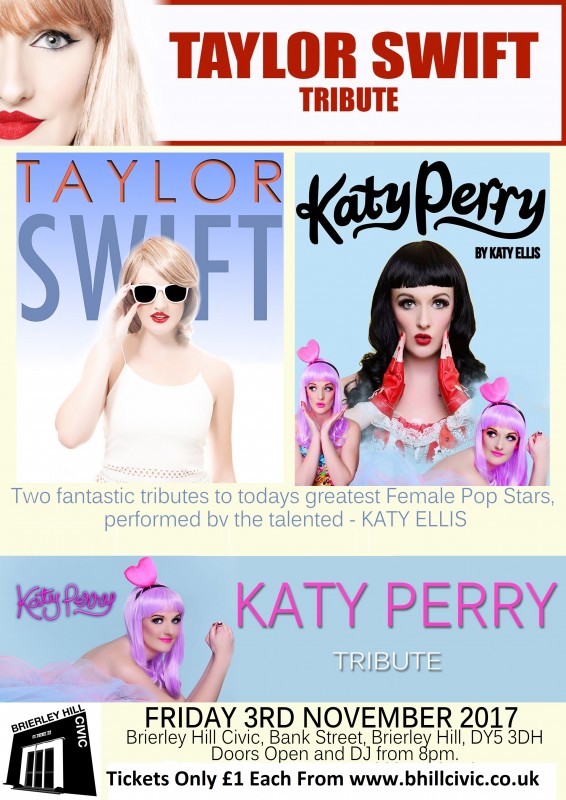 Nominated for the National Tribute Awards 2017 Katy Ellis, the most prestigious, authentic tribute act for Taylor Swift in the UK and some may say, the world.

Created, produced and delivered with pride, professionalism and the highest level of attention for even the smallest of details. The traits possessed by Katy Ellis has ‘Swiftie’ fans from across the United Kingdom and Europe believe they are back on the 1989 / RED World Tour, watching Taylor Swift herself.

As the UK’s finest tribute to Taylor Swift – Katy Ellis not only looks like Taylor Swift but has the same mannerisms, energy on stage and attitude; she is even the same age! Katy Ellis, like Taylor Swift was also born in 1989. Katy has been a singer in the music industry for over a decade. She has attained experience and knowledge in the field of entertaining audiences and delivering a show to remember.

After years of dedicated vocal training and performing, she has the range, sound, and style to deliver the ultimate Taylor Swift experience for all audiences, she has even included an awesome American accent to completely immerse herself as an authentic experience to Taylor Swift.

Katy sounds so much like Taylor, every audience is made to like they are to be in the presence of Taylor herself! Ms. Ellis is the real deal with only the original being better. As a dedicated Swiftie herself, she is proud on knowing EVERY song on EVERY album.

Katy is also  a fantastic Katy Perry tribute and shares so much with Katy Perry even the same name. This Katy Perry Tribute is one of a kind.

The show is 100% live and Katy Ellis is a ‘KatyCat’ herself and this Katy Perry Tribute knows every Katy Perry song, even the album tracks that weren’t released. So if you have a special favourite Katy Perry song, be sure to let us know! Katy has learnt every move of the original choreography from her tours. Attention to detail in every single second of this show.

The costumes were specially made in California for Katy and they are replicas of Katy Perry’s actual costumes! Each costume change represents the different stages in Katy Perry’s career from the Candyland cupcake loving girl to the Dark Horse Prismatic theme. With many costume changes throughout this colourful show this Katy Perry Tribute Act will bring a Katy Perry Experience like no other.