You’re My World is a celebration of Cilla Black and The Beatles.

This fun-packed show celebrates the forefront of the Brit-pop music scene of the 1960s, recreating the atmosphere of the original Cavern Club and then moving on to the glamour of performing to royalty at the London Palladium.  During the show, Natasha Harper captures Cilla’s infectious personality and brings you all her hits of the 1960s, including “Love of The Loved”, “Anyone Who Had a Heart”, “It’s for You”, “Alfie”, “Step Inside Love”, and “You’re My World”.  Joining her will be a tribute to The Beatles performing some of their greatest hits – “I Want to Hold Your Hand”, “All My Loving”, “Help”, “Twist and Shout” – plus many more. 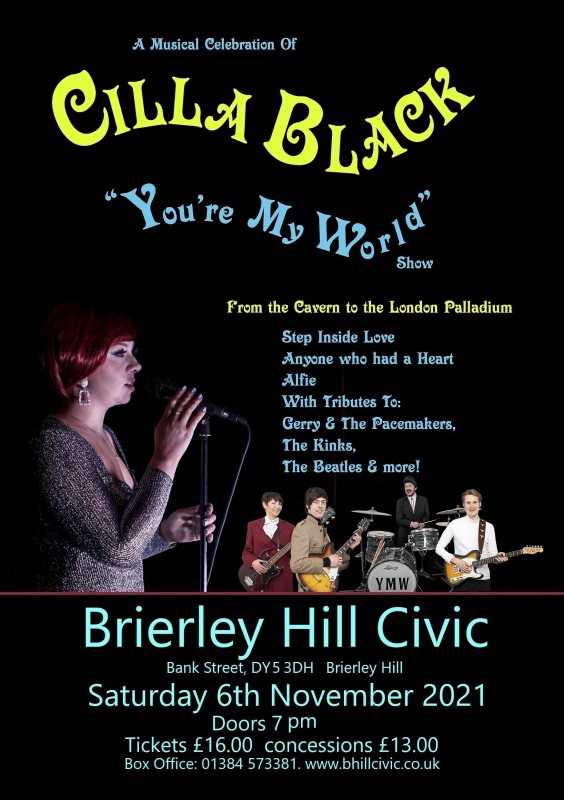 The first half of the show is set in the early days of the now world famous Cavern Club in Liverpool.  The Beatles made their first appearance at the club in 1961 and during the next two years made a further 292 appearances.  In the decade that followed, a wide variety of popular acts appeared at the club, including future star Priscilla White, whom worked as the hat-check girl.

The Fab Four invite “Swinging Cilla” from the cloakroom to the stage.  Cilla’s impromptu performances with many other Merseybeat groups at The Cavern and The Iron Door Club impressed the audiences and The Beatles’ manager Brian Epstein.

Cilla became a guest singer with Rory Storm and The Hurricanes, Kingsize Taylor and The Dominoes, and later with The Big Three.  When singing with The Hurricanes, Cilla used to share vocals with their then drummer Ringo Starr on the song “Boys”.

It is believed that after seeing Cilla perform at the Blue Angel Club, Epstein contracted Cilla Black (the music paper “Mersey Beat” misprinted her surname as Black, a name she favoured and happily kept), and Cilla became Epstein’s only female client on 6th September 1963.

The second half of the show and it’s Saturday night – welcome to the London Palladium!  The small, sweaty clubs of Liverpool are now a distant memory.  The leather gear is out and posh tailored suits are in.  The Fabs are world famous, appearing on the Ed Sullivan Show on American television.

Cilla’s hair is now styled by Vidal Sassoon and her dresses are designed by Mary Quant.

The song “Anyone Who Had a Heart” was suggested to Cilla by Epstein.  It was written by Burt Bacharach and Hal David, and was a huge hit for Dionne Warwick.  Cilla’s knockout rendition was recorded in January 1964 and went on to become her first number 1, and is still to his day the biggest selling single of all time by a British female recording artist.

The perfect follow-up “You’re My World” went to become Cilla’s second number 1 single.  Furthermore, it broke Cilla into the tough US market, gaining her world-wide recognition.