**Due to popular request we have booked the brilliant Johnny2Bad!**

'Johnny2Bad' are an 8 piece band from Birmingham, UK, who performs the music of UK Reggae legends UB40, presenting their high energy live shows with a Unique twist, doing all the Hits and Classics, including: Here I am, Homely Girl, Happens Again, Kingston Town, Baby Come Back, Can't Help Falling in Love, Red Red Wine, Cherry oh Baby, One in Ten, Food for Thought, and more... to audiences in both the UK and Europe (with the Brass section and Lead vocalist going out into the audience) which really gets the audience up dancing and Singing from start to finish. This band really brings the show to life, and put the "Wow Factor" into their UB40 show and performance with their high energy wherever they go!

The band will be supported by a DJ who will play before the band perform and after to keep the party going until late! 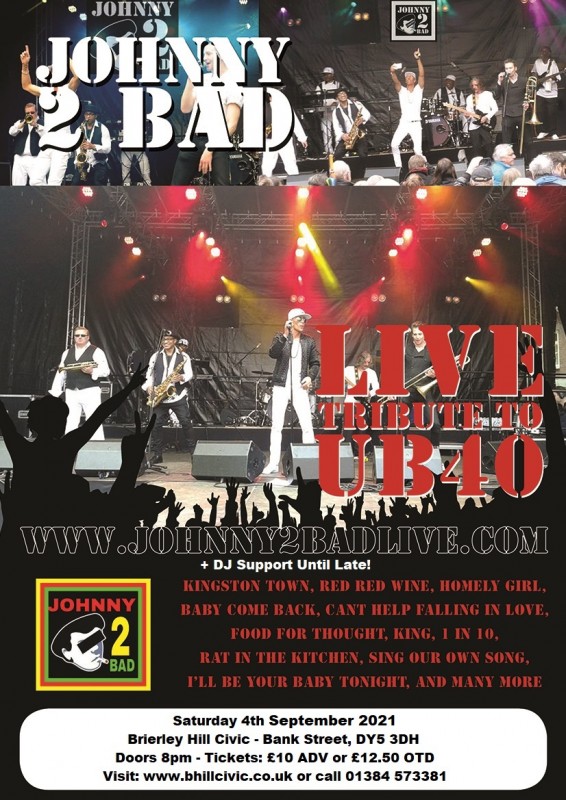 Members of Johnny2bad have supported and toured with artists like: Pato Banton and The Reggae Revolution (on many worldwide tours), Sting, Santana, Peter Gabriel, The Beat with Ranking Roger, Dreadzone, Selectors, The Moulettes, Skatalites, Jimmy Cliff, Third World, Morgan Heritage, Shaggy, Maxi Priest, Legends (Bob Marley tribute), and ultimately UB40 themselves with Ali Campbell, Astro and Mikey, during their 2014 and 2015 Sold Out shows in the UK, at O2 Arena London, Hatfield House, Burghley House and also Lincoln Castle in 2016, with our Original band XOVA.. and many other artists.

The band performed a number of pre-sold out shows across the UK and in Holland in 2016, including Sold Out shows at 'Reggae Night' in Nijmegen, 'Zomergeblaos fest' in Hilvarenbeek, and the Assen TT Festival in Holland, in front of an audience of over 8,000. Last year 2017 had seen the band play even more Sold Out shows throughout the UK, and also including the Dorpsfeest Stoke City Live fest in Holland, and a 5,000 plus tent at GlastonBarry tribute fest in Wales, along with us playing the Somerset tribute festival at the Yeovil showground.

Last year 2018 started where we left off with more Sold Out shows around the UK, including the band supporting Chic Le Freak and Sister Sledge at The Apex in Suffolk, Playing with Susan Cadagon (Hurt So Good) at Yardley Wood Social Club. We headlined this year's Derby Sausage and Cider festival 2018 after performing and smashing it there last year 2017, along with playing the Essex, Leicester, and Peterborough Sausage festivals 2018 for the 1st time.

For 2019 we have been once again booked to play this years Derby and Essex Sausage fests, GlastonBarry Tribute fest for 2nd time, Somerset Tribute fest also for 2nd time, ShropFest for 2nd year running, Robin 2 in Bilston x 2, JamHouse in Birmingham x 2, Oakengates Theatre in Telford again by popular demand, along with playing Babbels Live in Holland for the first time, and getting re-booked by various clubs and venues.