Another night of fantastic comedy to look forward to!

This next instalment of Live At The Civic is once again hosted by our resident MC Wayne Beese and features headliner Tom Stade plus Christian Reilly & Johnny Sorrow.

* Over 18s only
* Line up may be subject to change - quality comedy show always guaranteed
* Doors open at 7pm, show starts at 8pm 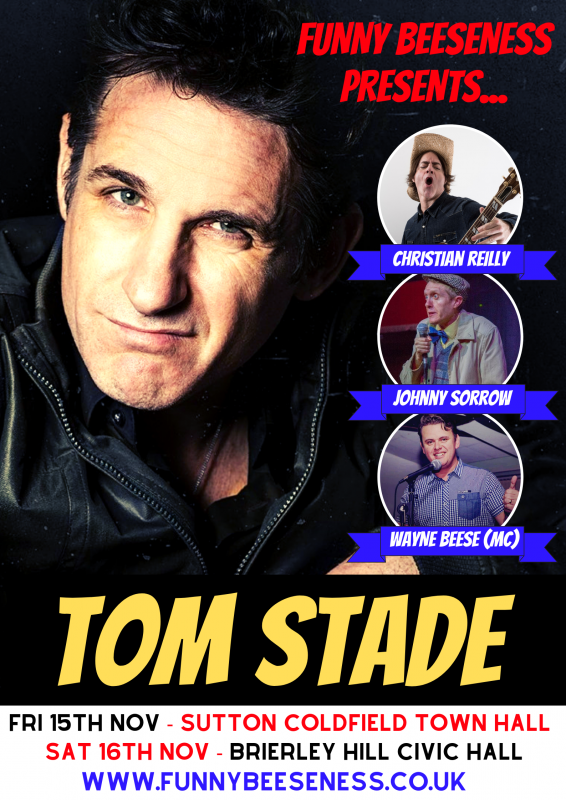 Tom Stade
Since arriving in the UK, this Canadian émigré has steadily earned a reputation as one of the most distinctive and exciting stand-up talents around. He instantly made a splash on the UK circuit with his magnetic stage presence and first-class story-telling, and after years topping the bill and playing at international comedy festivals around the globe, he is now established as a leading touring act in his own right, and finds himself well on the road to being a household name.

His irrepressible charm translated effortlessly to TV, and he has been invited onto every major stand-up TV show in the country. He has performed on BBC One’s The John Bishop Show and has performed twice on BBC One’s Live at the Apollo. He performed to his largest live audience to date joining the star-studded line-up on Ch4’s Comedy Gala at London’s 02 arena back in 2013. He has also performed on Michael McIntyre’s Comedy Roadshow and Lee Mack’s All Star Cast, both for BBC One, Edinburgh Comedy Fest Live for BBC Three and The Boyle Variety Performance for Ch4. He has performed twice on Ch4’s Stand-Up for the Week, was given an extended set on Dave’s One Night Stand and has also guested on BBC 2’s topical panel show Mock The Week. Other stand-up appearances include Comedy Central’s The World Stand’s Up, ITV2’s Comedy Cuts and multiple performances on Comedy Central’s The Comedy Store.

"Every inch a star...super confidence and charisma. If comedy is the new rock n roll, then he is Keith Richards" Scottish Daily Record

"So cool he could well be the answer to global warming. Gloriously funny." Scotsman

“A charmingly confident performer, an accomplished musician and a clever comic… The funniest songs I have heard in a long time” The Scotsman

Christian’s first comedy gig was in the Perrier Award-winning show, ‘Rich Hall is Otis Lee Crenshaw’. He is a global comedy circuit headliner and has appeared at numerous international comedy festivals, on BBC radio and TV, and in four series of the Chortle Award-winning stand-up and sketch show ‘Richard Herring: As It Occurs To Me’.

Johnny Sorrow
Year after year Johnny Sorrow stormed it at the Cradley and Stourbridge British Legion in his regular spot between the tombola and the chicken in the basket. Johnny was all set for national and possibly international stardom after being voted: "Black Country Bugle - Light-Entertainer of the Year 1989".

However, after losing out the following year to Stanley Stardust, a plate spinner from Smethwick, Johnny turned his back on show biz… a broken man… to become a cobbler.

In 2004 Johnny Sorrow made his come back, re-launching himself in London and across the UK, finally making a triumphant return to the West Midlands.