Join us for ‘One Wild Night At The Opera’ as two of the UK’s leading tribute bands go head to head in a battle between the best of British and the best of the USA.

Both Queen and Bon Jovi have sold out stadiums and arenas across the globe, with back catalogues of hits and anthems that most bands can only dream of.

Wrong Jovi and Queen Alive guarantee a night that will leave audience members wowed with the ultimate tribute to these legends from both sides of the Atlantic. Expect to hear rock anthems such as We Are The Champions, Bohemian Rhapsody, Livin’ On A Prayer and Wanted Dead Or Alive performed so well, you would think you are actually seeing Queen and Bon Jovi themselves!

Queen Alive aim to celebrate the wealth of talent that came together in Queen by recreating, with breathtaking accuracy, the style and excitement of a live Queen concert, which sadly, will never again be seen.

WRONG JOVI Wrong Jovi are widely regarded as “the best Bon Jovi tribute band in the world”, and have performed across the globe. The band perform a set of greatest hits, live favourites and rarities with such accuracy that even the Bon Jovi guitarist, Richie Sambora, was personally compelled to thank them for their work. 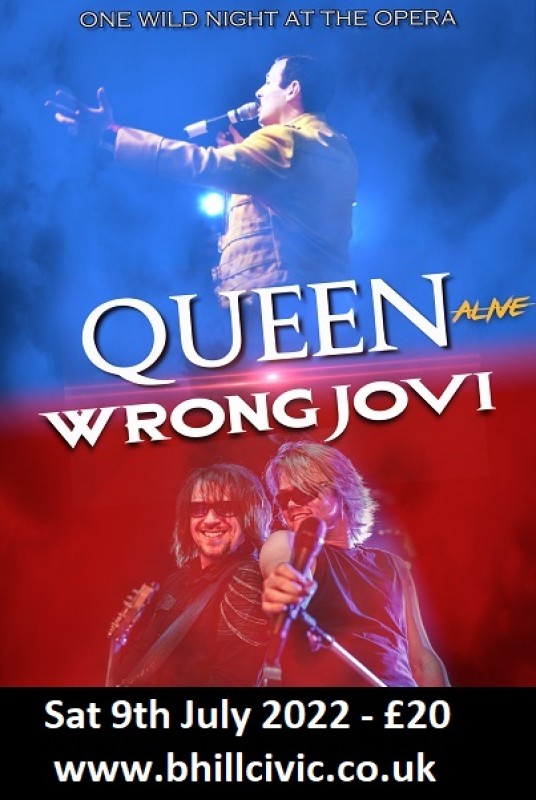