On 15th February 2023 we host 'Brierley Hill's Big Night Out'  - a fantastic Variety evening of Comedy, Magic, Song and Ventriloquism.

Steve Hewlett - Steve has performed all around the world, from holiday resorts, cruise ships to the Royal Albert Hall, from Bogor Regis to Branson Missouri USA. His big break was as a finalist on ITV'S Britain's Got Talent in 2013. He has performed all over wirh his own theatre tour 'The Steve Hewlett show' he also supported Jimmy Osmond on his Moon River tour in a residence at Fals casino, Niagara Falls, Canada in 2017, He's been on Eggheads and Strictly come dancing and more.

Janice Connolly - Janice is a free lance actress, writer and director and this Autumn can be seen on CBBC in 'So Awkward' playing Mazel, Janice also is Britain's got talent star with her comedy creation Mrs Barbara Nice. The character is a star of Phoenix Nights and Radio 2 sitcom 'Barbara Nice' and is also the Artistic Director of triple award winning women and theatre.

Alexandra Louise White - Alexandra was born and raised in Wolverhampton and combines her passion for singing and health and social care performing for hundreds and hundreds of care homes. Since 2008 she has performed in clubs, community centres and abroad. She has made such a positive impact on the care sector, uplifting the elderly, and especially residents suffering with dementia. She has become a known and popular artist throughout the West Midlands and Staffordshire area.

She performs popular music such as Motown, Rock n Roll, Golden Oldies, Country and Weston and more....You will be in for a treat!

Colin Tighe - Brought up in Sedgley, Colin has over 20 years experience in show business, starting off as a close up magician and his first ever gig was at The Mount Hotel, Wolverhampton at 17. Since then he has performed all over, from holiday resorts, companies such as Barclays, Asda, Virgin (V.I.P lounge, london) for comedy clubs, private events, Cruise ships, Ferries, theatres and also many army barracks including the Ministry of Defence.

Nominated as one of the best entertainers of 2005, 2006 & 2008, voted best act of the night performing at the ICC Birmingham in aid to raise money for Birmingham's children's hospital also winner of Freaky Got Talent comedy club, London. 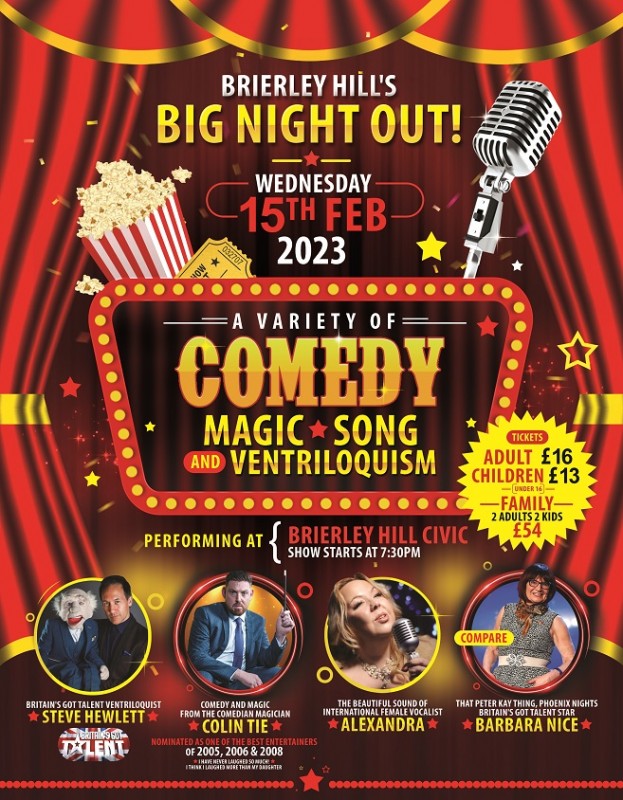