Get ready and be prepared for a very entertaining and nostalgic journey back some 60 years to a time when two teenage idols literally captivated the UK ....... ‘BILLY MEETS CLIFF’ celebrates the wonderful music of Billy Fury and Cliff Richard and is simply guaranteed to bring memories flooding back.

From audiences all over the country, Johnny Crossley continually receives wide acclaim for his portrayal of Billy Fury and much of this is from the many people who actually remember seeing Billy himself during his heyday.  The Sounds and the Moves are all there so if you love Billy Fury, you will love this show ......... and at the same time, easily recognised as the UK’s No 1 ‘Cliff’ performing lookalike, Will Chandler takes you on a wonderfully light-hearted trip through Sir Cliff’s earlier music years.  Hugely entertaining, Will combines the great songs, amazing look and fantastic moves of the Peter Pan of Pop along with a healthy helping of fun! .... and you may even get to experience that magical ‘Wimbledon’ moment!  It’s no wonder that on meeting Will, Sir Cliff himself states “It’s like meeting me”.

Authentically backed by a live band of top musicians, ‘BILLY MEETS CLIFF’ promises to be the one show you’ll not be able to forget and with a little of The Shadows haunting sounds thrown in, it is genuinely a night not to be missed.

Billy and Cliff really did get to meet occasionally during their early careers and now, once again, their music is intertwined in a non-stop show that will leave you in no doubt as to why these two legends are considered to be the backbone of early British Rock’n Roll History. 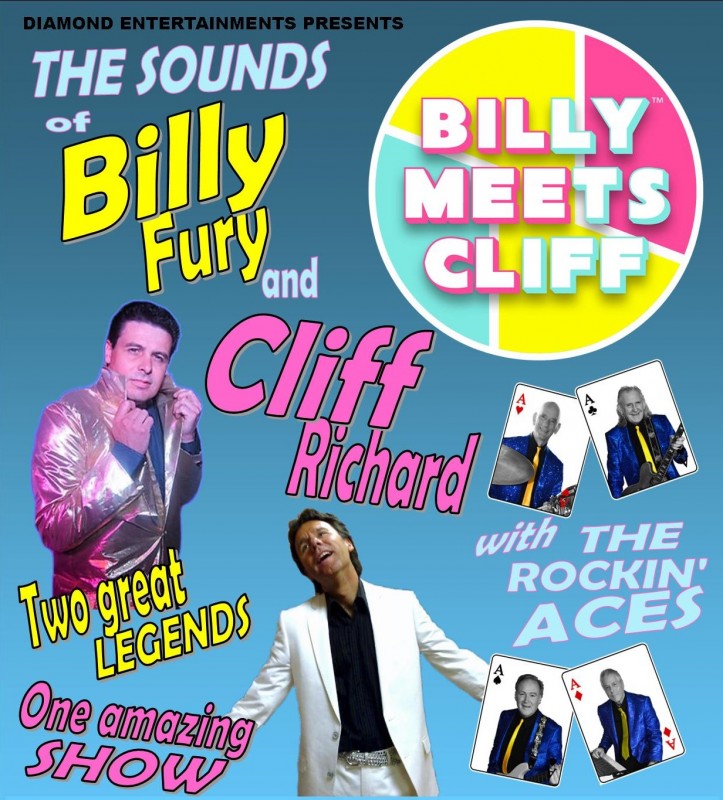