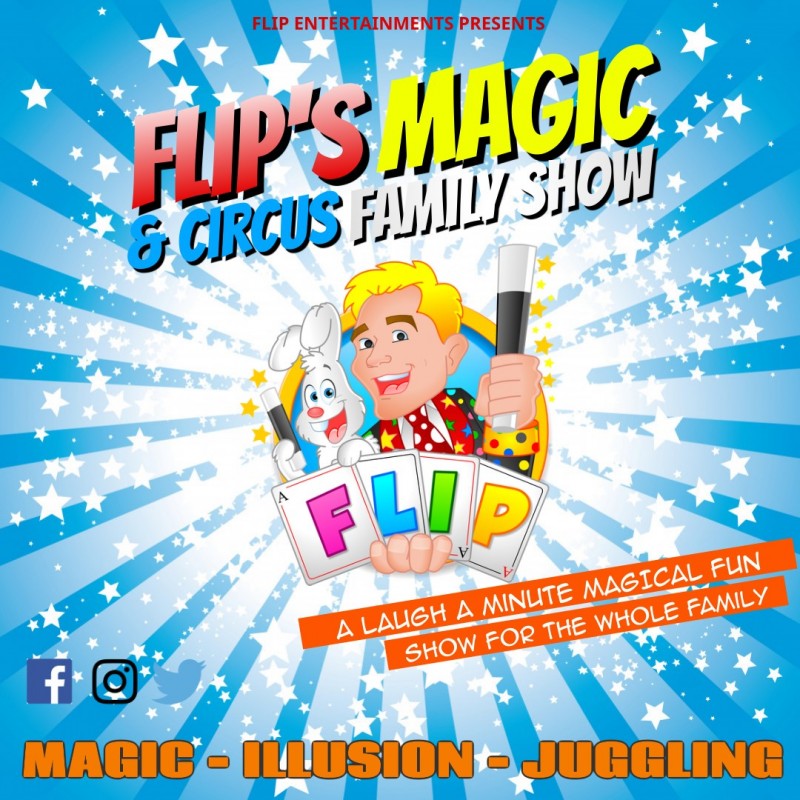 Flip’s Magic & Circus Family Show is jam- packed with magical illusions, crazy circus skills and puzzling tricks that are sure to knock your socks off and leave you both, amazed, and wanting more!

This fantastic family show is one you can’t afford to miss, but you can certainly afford to see!! 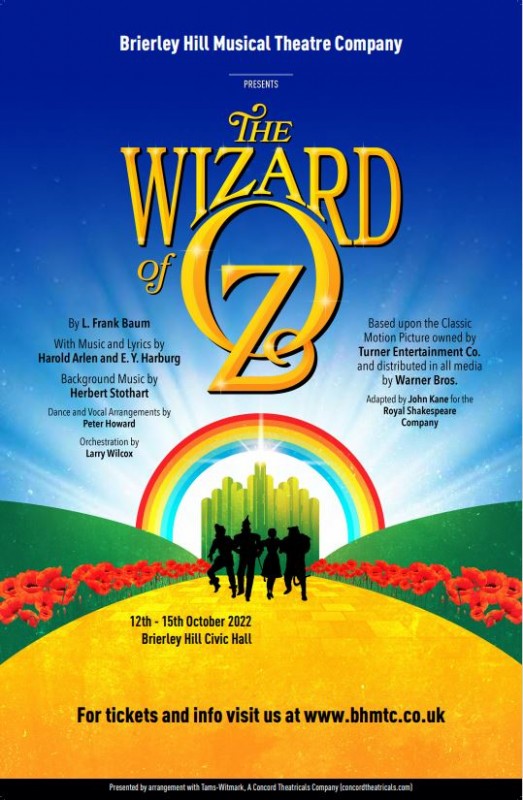 The Wizard of Oz is of one of the best-known musicals of all time and guarantees a great night of theatre for all the family.

There really is no place like home and Brierley Hill Musical Theatre Company are delighted to be performing this much-loved classic tale back at the Civic Hall in what will be the 75th year of the company’s history of performing shows in Brierley Hill!

Join Dorothy, Scarecrow, Tin Man and Lion as they follow the yellow brick road on their quest to reach the Emerald City. However, the Wicked Witch of the West vows vengeance on Dorothy and does all she can to stop the friends getting to the Emerald City. But they do reach it, and manage to see the Wizard and will Dorothy get to return home to Kansas?

The Wizard of Oz has all of your favourite characters and songs from the classic film with a fresh and modern feel to the show, songs include Somewhere Over The Rainbow, Follow the Yellow Brick road and If I only have a brain.

Showing every evening from 12th - 15th October with an additional matinee performance on Saturday 15th October.

By L Frank Baum. With music and lyrics by Harold Arlen and E. Y. Harburg. Background music by Herbert Stothart. Adapted by John Kane for the Royal Shakespeare Company.

An amateur production by arrangement with Concord Theatricals Ltd. on behalf of Tams-Witmark LLC 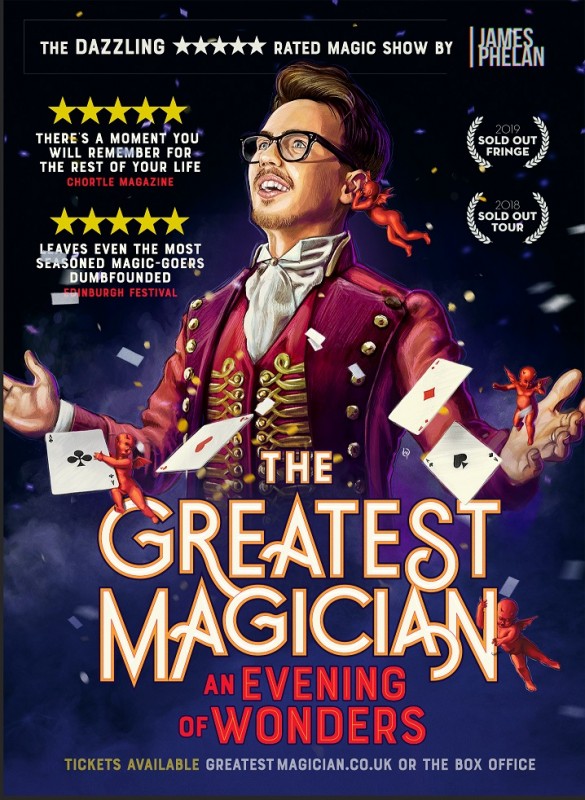 A DAZZLING new MAGIC SHOW - presented by the magician most famous for jamming the BBC  switchboards after he correctly predicted the lottery. This astonishing, enigmatic, five star rated magic  show will leave you aching from laughter and dizzy in disbelief.

Directed by the late Paul Daniels, this mind-blowing magic show comes to the stage for the first time -  you’ll be transported to a jaw-dropping world of light-hearted hilarity, wonderment, and mystery.

★ ★ ★ ★ ★ Leaves even the most seasoned magic go-ers dumbfounded – Fringe Magazine

Focusing on mind-bending feats of illusion, from making people forget their own names to vanishing  them from the auditorium entirely - this sensational show is a sure sell-out and showing exclusively for a  limited run.

Presented by host of BBC’s Trickster: Live, ‘the most anticipated magician in a generation’ - James Phelan  is The Greatest Magician.

*Open To All Ages But Recommended For Ages 13+ 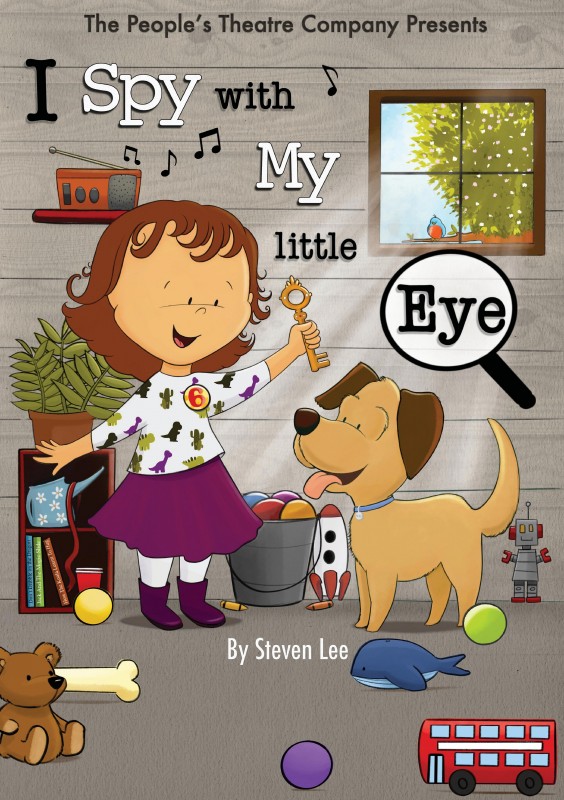 Doors open at 1.45pm
The People's Theatre Company presents:
I Spy With My Little Eye
- Based on the picture book by Steven Lee
Molly and Bingo the puppy are having a birthday party and, best of all, you're invited!
There'll be a terrific treasure hunt, sensational sing-along songs and lots of fantastic games to play, including Molly's favourite game, I Spy With My Little Eye!
So put on your party clothes and come join us for what promises to be a magical day of fun and laughter.
It's going to be the best party ever!
------------------
A sweet surprise and photos with Bingo and the birthday girl will be available after the show so grown ups should bring along their cameras to capture the smiles. 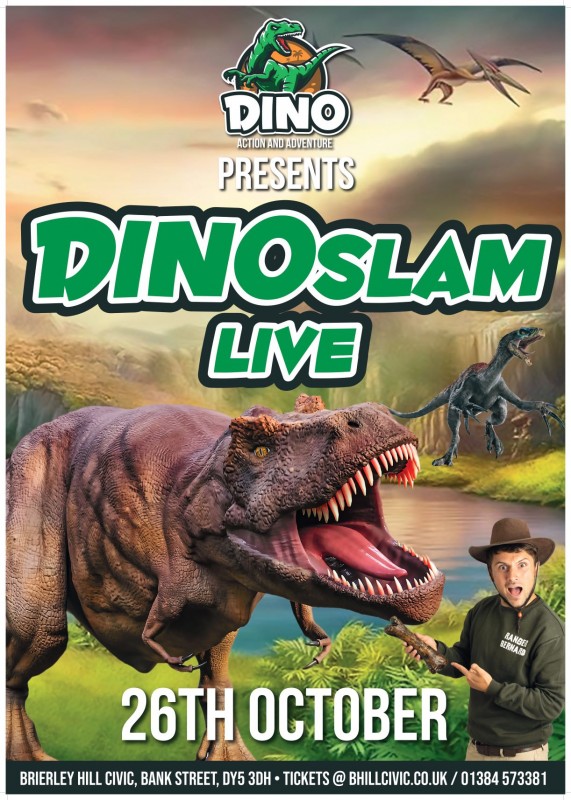 Travel back to the prehistoric time to meet some of the formidable dinosaurs that ever lived. Our live shows allow children of all ages to come toe to toe with the worlds greatest dinosaurs. Ranger Bernard and his team are excited for you to meet the baby pups and embrace the terror of our walking dinosaurs. This is a perfect and magical experience for all Dinosaur enthusiast. Discover dinosaur fossils and even seen a Trex hatch live!

Warning... there will be loud music, lights and meat eating dinosaurs on the loose!

Some of the dinosaurs that will be there...

And much much more!

*VIP Package available £20 per Child. (Only 25 available per show.) 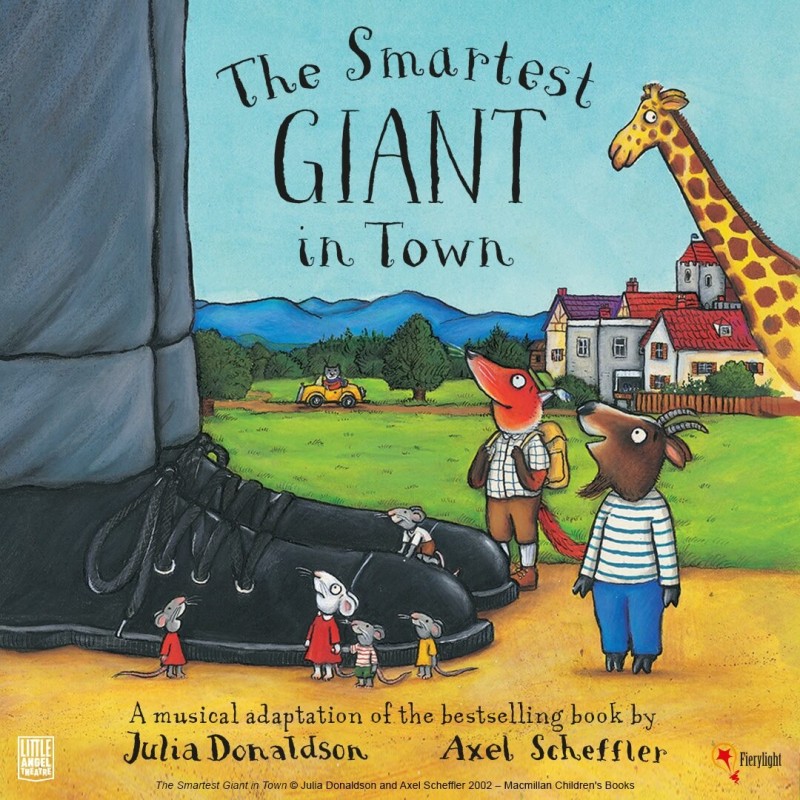 Based on the bestselling book by Julia Donaldson and Axel Scheffler

George wishes he wasn’t the scruffiest giant in town. So when he sees a new shop selling giant-sized clothes, he decides it’s time for a new look: smart trousers, smart shirt, stripy tie, shiny shoes. Now he’s the smartest giant in town . . . until he bumps into some animals who desperately need his help – and his clothes!

This heart-warming tale about friendship and helping those in need is brought to life in a musical, puppet-filled adventure, following on from Little Angel Theatre’s bestselling adaptations of Julia Donaldson’s picture books including The Singing Mermaid and The Everywhere Bear.

*Recommended for children of ages 3 to 8. 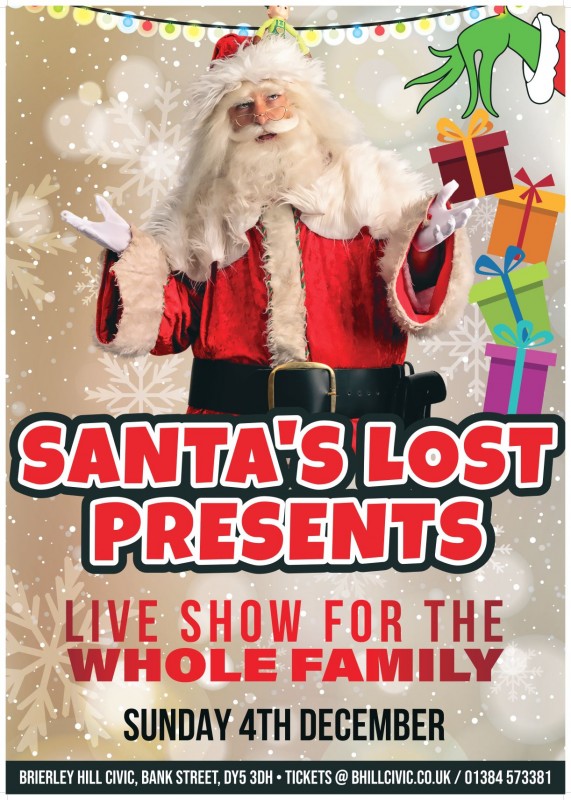 The excitement that Brierley Hill has been chosen to be the first stop on the journey this year. There is however an issue; someone has stolen the first bag of presents. Join Santa on his interactive journey trying to find out who has stolen the presents whilst meeting some interesting characters. There will also be some fun and  mischief from both the Grinch and Elf on the shelf.

*VIP ticket holders and their significant adults must arrive 30mins prior to the stated doors opening time. 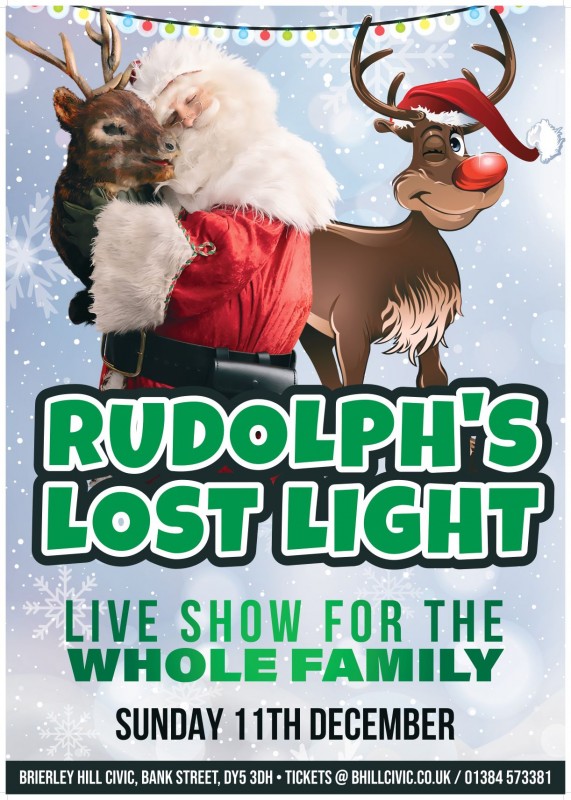 Join Santa in his quest to get everything ready for the big day. There is one issue... Rudloph has lost his light! Yes his nose is not shining. Christmas may be cancelled so we need your help.

Santa will be joined by Mr Snowman, Our Christmas Gonks, Rudloph and Clarice. We will need your help, energy and Christmas spirit to ensure Rudloph finds his red nose light. Come and join our festive, singing, dancing interactive show this Christmas!

*VIP ticket holders and their significant adults must arrive 30mins prior to the stated doors opening time. 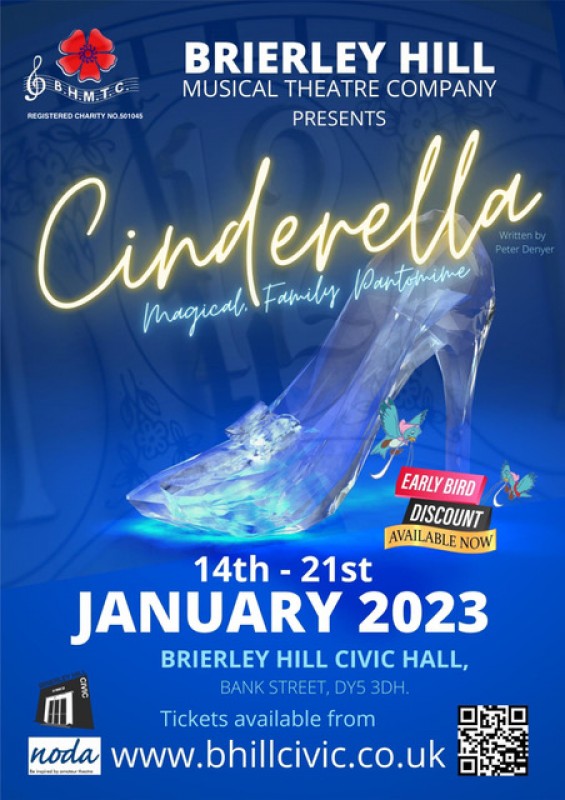 Following on from the success of their last panto, Aladdin , Brierley Hill Musical Theatre are back with the Pantomime of all Pantomimes, Cinderella!

The most popular pantomime of them all. “Cinderella” is a wonderful combination of traditional panto antics with the grand romance of “rags to riches” Cinderella with the handsome Prince Charming. Though the hideously horrible Ugly Sisters treat our heroine Cinders appallingly, they are also very funny. There is much humour, lots of audience participation, all neatly woven into the spectacular storyline!

Join this talented local company as they present this traditional, family pantomime full of surprises, fun and laughter, loaded with popular songs, dance, special effects and comedy for all the family.

Early bird ticket prices of just £12 per ticket until September! (£15 each after)

**Show end times are approximate and may the show may last longer than advertised. 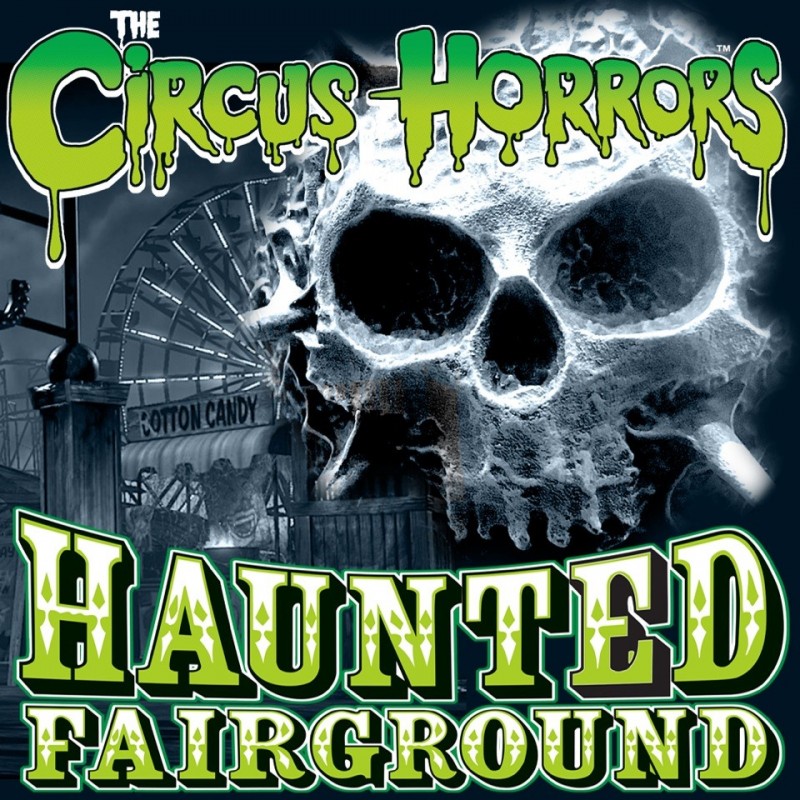 The Circus Of Horrors - The Haunted Fairground, 5th March 2023

- Set in a decrepit Fairground on the edge of nowhere. Haunted by creatures of the unknown who had been Plastinated as exhibits in The House of Wax & brought back to life by a Tesla Coil machine to run havoc.

This FANGtastic new show is set to blow your mind with an amazing set, stellar lights, special effects & of course Beautifully Bizarre Circus acts,a sinister story and the darkest of magic all performed to an original Rock score.

When the Circus of Horrors began 27 years ago at Glastonbury 1995 many people thought it wouldn’t last 27 weeks let alone 27 years, but with its ability to reinvent itself time & time again it has taken the extreme to the mainstream and become a household name after reaching the finals of Britain’s Got Talent, performing in London’s West End & tour around the World.

Whether a Rock fan or theatregoer The Circus of Horrors has something for everyone.
Imagine a brilliant rock show combined with amazing, bizarre & dare devil Circus acts, a stellar light show all performed with a forked tongue firmly in each cheek. If Quentin Tarantino had directed Cirque Du Soleil you would be half way there.

£5 Off All Tickets With Promo Code 'EARLYBAT' when selecting seat. Valid till 31st October 2022.

*This show is for adults. Ages 16 - 17 will be allowed if accompanied by an adult.

Celebratory Quotes:
It was phenomenal, one of those shows that if you missed you would say Gosh I wish I could have seen that'.
Jimmy Page of Led Zeppelin after seeing Damned / Circus of Horrors at London Palladium
‘You have to go & see this if one day something will go wrong, you will be able to say I was there’  Graham Norton
'That’s what I call entertainment'  David Hasselhoff
'I loved it'  Simon Cowell
'Like Rocky Horrors on acid' Amanda Holden
‘Totally Unbelievable’ Scott Mills, Radio 1
'A Brilliant marriage between Circus & Cabaret'  Judge Rinder 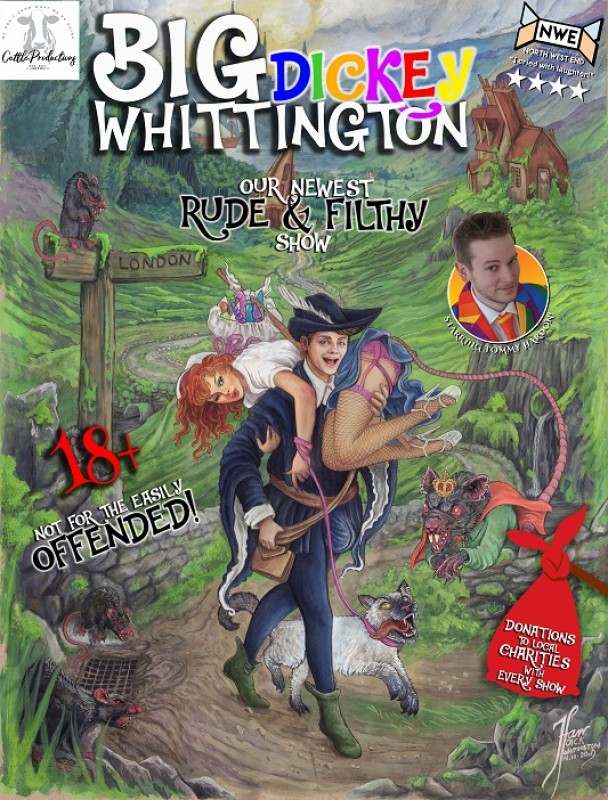 However, like a fool he falls in love and where there’s women there’s trouble – he ends up banished from London!

Will Dickey get the girl and save the day? Will he make a dirty movie?

Whatever happens, it’s sure to be another hilariously mucky night! 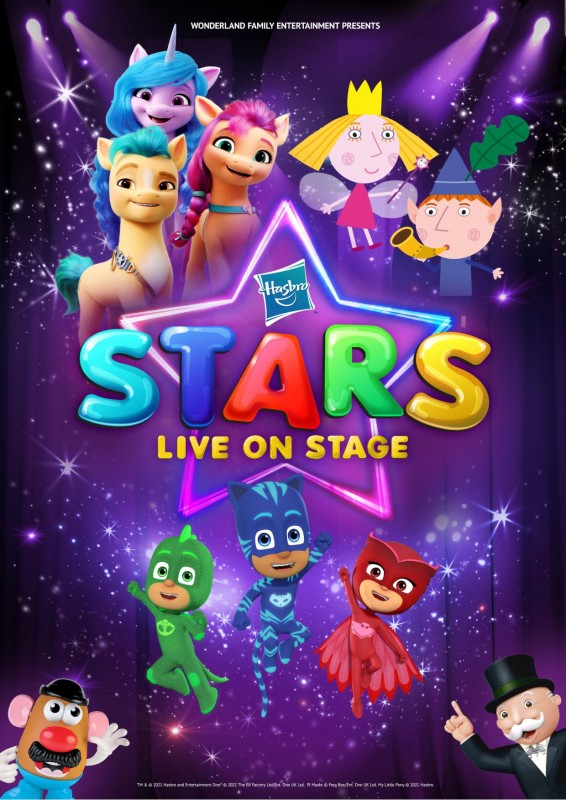 The stage is set for the greatest talent show ever! For the first time together, we will see amazing musical performances from your favourite TV Stars, LIVE on stage!

Ben and Holly will sing some of their favourite songs with help from the magical Nanny Plum.

The PJ Masks heroes, fresh from a new adventure, will show the kids that they can be a hero too! And last but not least, we have a very special performance from My Little Pony that will get everyponies hooves stomping.

Joining our headline acts are the amazing Mr Potato Head and Mrs Potato Head who are super excited to be hosting the show and who may also have a surprise or two in store. Mr. Monopoly will be making sure that everything is in order back stage and will also be sure to make an appearance in the stage show of the year!

Get ready for fun, laughter and lots of singing and dancing in the unique multi-character live stage show on its European Tour.

Aged under 12months - Free but must be seated on adult’s lap.