Following the amazing night we held last year, it's back!. Giving us a chance, once again to say "THANK YOU" to our wonderful N.H.S & Care workers.

Not only for seeing us through the epidemic but for caring for us every day of the year.

So once again we will be inviting over 60 V.l.P guest's for a totally free night out.

Entertainment will be Tony Martin, with special guests, then dancing until Midnight with your favourite disco tunes.

Tony began singing around the same time Michael Bublé was becoming a big star and Robbie Williams's album Swing when your winning was released. Other famous vocalists began releasing albums of the Great American Songbook & soon Tony was touring himself with some of the best UK'S Big Band's, as part of the award winning, record breaking Kings of Swing. After a residency at the famous Blackpool Tower Ballroom, The Kings of Swing then began touring the UK and Europe. Tony sang solo at Las Vegas Royalty on numerous occasions, and then back in the UK for the Royal Variety Gala Dinner. He has also entertained at top celebrity's party's, sporting events, London's top hotels and the West End.

These days Tony's repertoire ranges from popular 50s music to modern day. He has an amazing voice, charisma and passion for every song he sings, which makes him the perfect candidate for this very special night.

So along with Tony, let's # say a big "THANK YOU", with a night of song, dance and lots of laughter (and of course a little tipple or three.)

Tickets £15,.. All proceeds go to creating a night to remember for our N.H.S Staff and Carers ❤️...

Please telephone 07868846210 to book tickets and for any other information. 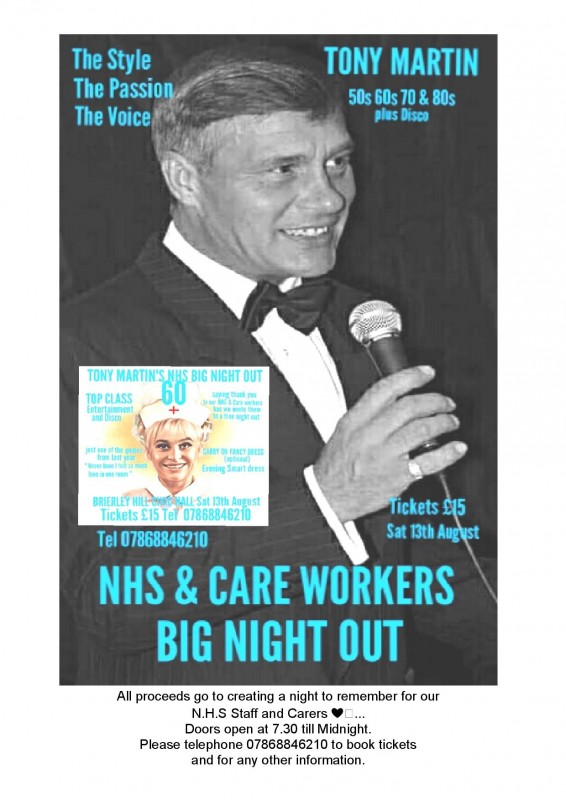